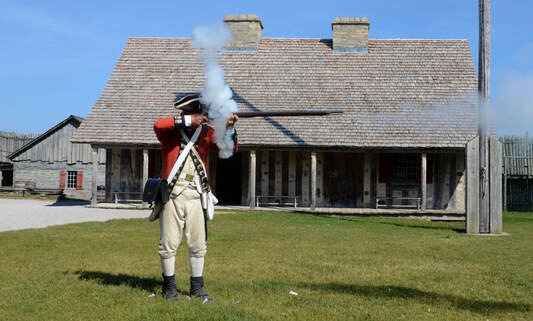 Fort Mackinac Soldier
Commanded by Lieutenant Colonel George Croghan of the Army, and Commodore Arthur Sinclair of the Navy.  750 American soldiers and sailors left Detroit in early July, bound for Mackinac aboard seven warships.  After a three-week voyage, the American fleet arrived off Mackinac Island.

Sinclair’s warships first attempted to bombard the fort, but were unsuccessful due to the fort’s height above the water.  Croghan then ordered his troops ashore on the north side of the island around noon on August 4th.

British commander Lieutenant Colonel Robert McDouall marched his troops and their Native American allies into defensive positions on a low ridge in the center of the island, where they waited for the Americans.  Shortly after 3:00 pm, American troops encountered the British and the battle of Mackinac Island began.  As Croghan deployed his troops, they exchanged musket and cannon fire with the British.  Although this firing was inaccurate and did little damage, many of McDouall’s Native allies slowly retreated.

McDouall also received false reports that the American warships were moving to attach Fort Mackinac, forcing him to temporarily withdraw some of his troops.  Just after 4:00 pm, Croghan ordered his second-in-command, Major Andrew Holmes to attack the British left flank with nearly half of the American troops.  As they moved towards the British, these troops were ambushed by Native warriors who had remained in the woods.  Holmes was killed instantly, and several other men were severely wounded.  In the confusion of the ambush, the remaining Americans charged across the battlefield as British troops advanced and fired on them.  As casualties grew, Croghan ordered a retreat to the American warships ending the battle.  McDoull and his men had successfully defended Mackinac Island. Holmes and 19 other Americans were killed in the battle, while over 50 were wounded.  Despite these casualties, Croghan and Sinclair were determined to recapture Mackinac.  After destroying the Nancy, the only British supply ship on Lake Huron, Sinclair left two of his warships, the Tigress and Scorpion, to blockade Mackinac Island.  Near starvation, the British mounted a daring night raid and captured both vessels, bringing much-needed food and supplies to Fort Mackinac.
Defeated on land and water, the Americans never returned to Mackinac during the war.  Only the Treaty of Ghent, which ended the war in December 1814, returned the fort and island of Mackinac to the United States.

Discover Fort Mackinac in person with our range of Great Lakes cruises that visit Mackinac Island, one of the most popular destinations of all the lakes.
Learn more at www.mackinacparks.com/parks-and-attractions/fort-mackinac/
​Address:  ​7127 Huron Rd.
Mackinac Island, MI 49757