With Windstar Cruises, you can expect an in-depth experience that ​doesn't quite compare to anything else. The international cruise line offers tailored experiences that are bound to be as educational as they are entertaining. In addition, Windstar offers some of the best small-ship cruises on the market today.

The Windstar Cruise Line: From 1984 to Today

Windstar Cruises was founded in 1984 to resounding success. It released a number of ships in the following years before being purchased by Holland Cruise Line. Later on it was purchased by Xanterra Parks & Resorts, Inc, which is still the parent company today. Under Xanterra, the Windstar cruise line has grown to become one of the world's best small ship experiences -- even going so far as to win awards from travel publications like Condé Nast.
The cruise company is still continuously growing its line, introducing more ships to take their branded experience all over the globe. Windstar's Great Lakes and New England cruise itineraries, beginning in 2014 with the launch of the Star Pride, are already one of our most sought-after cruises. With all that Windstar puts into their cruising experiences, you'll feel like you're on your own private yacht.
Star Pride is the perfect ship to watch the world sail by from the comfort of your own suite.  This is one of the largest ships offered with Great Lakes cruises. Despite this, the ship is still relatively small, carrying 312 guests. Because of this low number, service is impeccable . After her renovation the Star Pride still tucks into small ports and narrow waterways along the US and Canadian coasts. We can’t wait to welcome you onboard for your next 180° from ordinary adventure onboard the Star Pride!

When sailing through the US & Canada with Windstar, you'll be visiting excursion after excursion. You're bound to get hungry, but this cruise line comes prepared. On your cruise with Windstar, every meal is included. This ensures you never have to worry about finding somewhere to eat in a city -- unless you want to, of course -- and always have something great to look forward to when returning to the ship.
​In addition, you'll get to choose between two world-class eateries on board Windstar's cruise ships. As part of their upgrade initiative, they've collaborated with renowned chefs to launch on board restaurants that rival even the best of dining establishments.

On each Windstar Cruise, you'll find a host of amenities that almost make it feel like you've never left home. On their North America-cruising Star Pride, you can expect all the following amenities. Each of these is included with the price of your cruise, so you won't have to worry about unforeseen costs. Here, we've listed all of Windstar's amenities, in-room and on the ship. 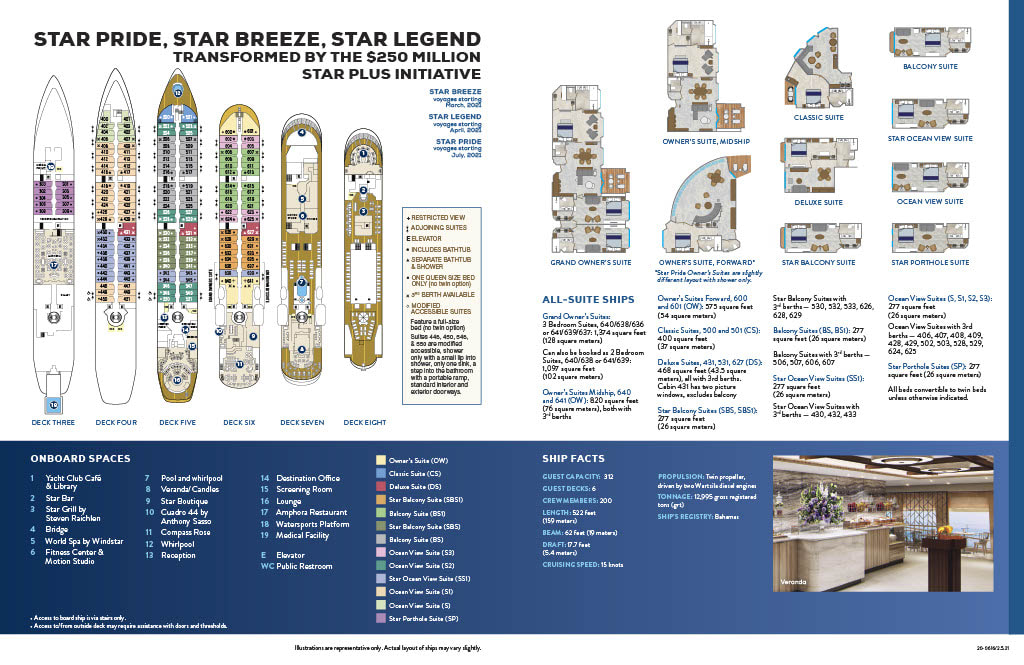 Download File
Updated in 2021 with Windstar's Star Plus Initiative, the Star Pride now can hold up to 312 guests on board, while still maintaining its private-yacht feel. You'll have plenty of room to explore, from sun decks to luxurious spas. The ships have tons of offerings to keep you entertained and relaxed, ensuring an exemplary cruise through North America.

Suites on board the Star Pride

Each room on board the Star Pride is at least 277 square feet, roughly the size of your average hotel room. They offer plenty of space, and even feature complimentary room service to ensure an enjoyable stay. Each suite has the amenities of a five-star hotel, along with a host of luxury comforts.

On board your Windstar North America cruise, you'll have a host of features included with the cost of your ship fare. Here, we list all of Windstar's additional inclusions:
NOT INCLUDED:
Fares do not include airfare, transportation to and from the ship, optional Pre and Post Hotel accommodations, optional shore excursions, port charges, fees or gratuities. A fuel surcharge may be charged for cruises that have not yet sailed. In addition, a Windstar cruises beverage package is available upon request for unlimited cocktails and alcoholic beverages. Internet packages are also available for purchase through our cruise experts or on your ship, at the Windstar front desk.

Each Windstar Star Pride cruise features an optional All-Inclusive Upgrade, that includes unlimited Wi-Fi, beer, wine, and cocktails, and covers the cost of gratuities for as little as $79 per person, per day.

​* Cruise fares quoted are in U.S. dollars, per person (based on double occupancy).  Single Supplements also available.
Cruise Fares do not include government taxes and fees, port charges, airfare, travel insurance, gratuites,
personal expenditures or transportation costs incurred while traveling to and from embarkation ports.
Rates and Schedules are subject to change at any time.

See all of our Great Lakes Cruise Lines